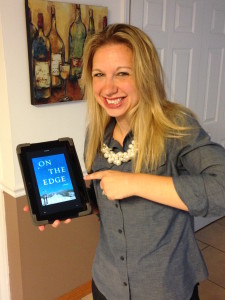 For me, every book is different whether it’s actually the writing process or how the idea forms and translates into a story. The idea for On the Edge came to me about five years ago in 2010, while I was watching the Winter Olympics. My favorite event is the Men’s and Women’s Half Pipe competition. I have so much appreciation for the risk they take as athletes and the overall excitement I have as a spectator.

As with most sports the Men’s events are always highlighted a little more than the Women’s. It made me wonder what it would be like for a young woman coming up in the sport—how one goes from recreational snowboarding, to breaking into professional snowboarding. I also thought about all the sacrifices these athletes and their families have to make in order to try and accomplish that goal—with no guarantees. In 2010, this was a thought that I jotted down in my journal and moved on from.

Fast forward to 2014… I was aimlessly surfing YouTube and I started watching recent Olympic highlights, when the idea resurfaced. BUT this time I already had one published novel under my belt and I was confident I could do it again.

Three things had to come together for On the Edge to become a story. First, unlike Safe & Sound, this novel would take some research because I didn’t know much about snowboarding. I snowboarded recreationally, but I’m not very good. I did the majority of my research online—I read many tutorials, learned about snowboarding schools, studied competition schedules, and watched a lot of snowboarding videos. That only took me so far—so next I reached out to several professional snowboarders in order to properly fact check what I had learned and what I was thinking of using for my characters. I was very fortunate to connect with Hana Beaman. We emailed and eventually talked on the phone. She was able to answer the more technical questions—any mistakes in the book are my own! This process really shaped Hayden Grace Parker—her goals, her ambitions, and her journey. Once I felt satisfied with the research, I began writing. I knew I didn’t want the story to be too technically focused on snowboarding, because it wouldn’t be relatable to everyone. I simply wanted readers to know just enough to understand the sport, which would allow them to be transported into that world with Hayden Grace.

Secondly, I wished to explore the perspective of the single parent with a gifted/talented child. I had watched many friends and family members raise their own families. Eventually, there comes a time when they fall into a routine: school, work, home, and repeat. I gathered inspiration from them and started to shape Andy Parker. I wanted Andy to be a strong woman, but not perfect—for the reader to experience and truly understand her challenges and strengths. It was also important for Andy’s late husband, Stephan Parker, to be a serviceman for two reasons. My own father served in the Army and then the National Guard, until he retired. His service defined who I was as a person, who my family was, and our values. It fit with the story I wanted to tell. But even more importantly, I wanted to highlight the sacrifices these men and women make daily for our country, which are ENORMOUS—I wanted to celebrate that.

Finally, let’s talk about Paul Westcott. His character is part professional snowboarder, part celebrity, and entirely fictional. Paul comes into the story without much baggage, which allows him to serve as a good balance for Andy. He was so much fun to write because he was carefree, relaxed and “chill.” Until he met Andy, he had conquered everything in life. He never anticipated his greatest challenge would be love.

On the Edge is the story of single mother Andy Parker, who is caught up in the day-to-day hustle and bustle of life—who has forgotten about love, romance and adventure. Hayden Grace Parker is a determined, often feisty teenager on a mission. Paul Westcott is the change that challenges and ignites them. It’s an adventure in life and romance.

P.S. Make sure to check out the THREE Giveaways I’m running to celebrate the release of my new novel!