T.S. Krupa was born in New Haven, Connecticut. Krupa and her younger sister were raised in a Polish household with a blended American culture by her parents Stan and Krys; she is fluent in Polish and frequently travels to visit family abroad.

Growing up in Clinton, Connecticut Krupa attended The Morgan High School. She started playing field hockey in the seventh grade after being cut from the soccer team. She was accepted to Franklin Pierce University (College then), where she continued playing field hockey for four years. She made it almost all ten years of her field hockey career without any injuries only to break her nose playing during her senior year. After college, Krupa traveled cross-country for a job at Texas Tech University. While there, she earned her Master’s and became a Red Raider (Guns Up!) and a huge college football fan. It was there that she started coaching club lacrosse and found an instant connection with coaching.

In 2009, she finally started work on her childhood goal and began working on her Doctorate of Education from North Carolina State University. Her dissertation topic focuses on ethical decision-making. Krupa graduated with her Ed.D. in May 2014. 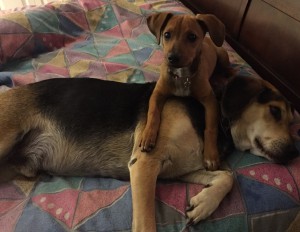 Krupa now lives in North Carolina with her daughter, husband, and dog Chase. Chase came into her and her husband’s life in 2009 after a neighbor found him tied up at a gas station. Krupa’s husband brought him home and told her that he had a surprise and if she wanted to keep it she needed to buy dog food. It was love at first sight and Chase is now spoiled rotten.

Along the way T.S. Krupa has always written in journals and enjoyed writing. It was only recently when the stories could no longer just run through her daydreams that she felt the need to put them down on paper. Krupa has published four full length novels.

T.S. Krupa loves hearing from you, send me an email with questions, book signing, character questions or book club requests.